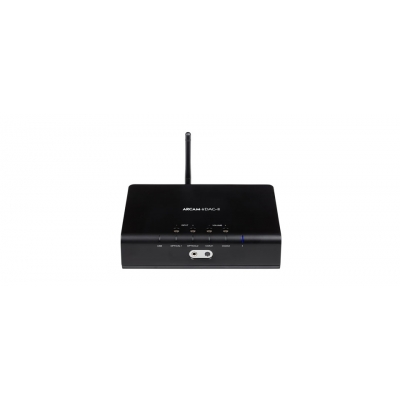 Description
The irDAC-II is a small box about the size of a thick paperback book, finished in black. Inset on the front panel is a small plate with a 3.5mm headphone jack and the sensor for the infrared remote control. Along the top of the front panel's radiused top edge are six LEDs, each of which glows green to indicate which input has been selected: USB, Optical 1 and 2, Coaxial 1 and 2, and Bluetooth. (The USB and Bluetooth LEDs glow red when no data are being received.) On the top panel are four pushbuttons: two to choose an input, two to raise and lower the output level. The rear panel has two pairs of outputs on RCA jacks, one pair fixed in level and one pair variable; two S/PDIF inputs on RCA jacks handling streams with sample rates up to 192kHz; two S/PDIF on TosLink jacks that are limited to 96kHz data; a Bluetooth antenna; a USB Type B input jack; the Power switch; and the input jack for the wall-wart power supply.
Read more at https://www.stereophile.com/content/arcam-irdac-ii-da-processor#tg4z9F0TlXaj4ZjB.99

Operation simply involves choosing an input by scrolling with the top-panel buttons. If Bluetooth is selected, the relevant LED flashes purple while the user simultaneously presses the two input buttons to pair a smartphone, tablet, or PC. When the connection has been established, the LED glows a steady blue when music is playing. Simultaneously pressing both volume buttons mutes the irDAC-II's output, and the LED for the input in use turns orange. A second push of both volume buttons together lifts the mute. The remote control duplicates the top-panel functions, and adds transport control of a PC or Mac USB source via the Human Interface Device (HID) protocol.

Listening in the Big Rig
As the irDAC-II has a volume control and I currently don't have a preamplifier, I plugged it straight into my power amplifiers with unbalanced AudioQuest Cheetah interconnects. The sound was good from the outset. The balance was overall a tad lightweight, though with good definition in the low frequencies. In "Don't Give Up," from Peter Gabriel's Secret World Live (16/44.1 ALAC file ripped from CD, Geffen), Tony Levin's double-stopped bass line punctuated by an underdamped kickdrum remained clean and clear. Billy Drummond's kick drum in "Followthrough," from the Jerome Harris Quintet's Rendezvous, which I recorded in 1998 (16/44.1 ALAC file from CD, Stereophile STPH013-2, no longer available), was well defined, despite its resonant tuning.

I wondered if the fact that the irDAC-II is powered by a wall-wart supply would limit its dynamics, but it reproduced the solitary conga drum that begins "Hotel California," from the Eagles' Hell Freezes Over (24/44.1 ALAC file ripped from DVD, DTS Entertainment 71021-51006-2-3), with superb slam. The individual tone color of Drummond's drums and cymbals in his solo on "Followthrough" were well differentiated, as were the various tuned percussion instruments providing the minimalist accompaniment to Peter Gabriel's hoarse vocal in "San Jacinto," from Security (16/44.1 ALAC file ripped from UK CD, Charisma).

Though the acoustic of Blue Heaven Studios, in Salina, Kansas, was readily apparent in "Followthrough," the soundstage was a little shallower than I'm used to with the PS Audio DAC. Playing Patricia Kopatchinskaja's fiery performance of the Tchaikovsky Violin Concerto, with MusicAeterna conducted by Teodor Currentzis (16/44.1 FLAC file ripped from CD, Sony Classical 88875165122—a tip of the hat to Jon Iverson for recommending this recording), the soundstage was again a little shallower than I expected, but the highs were more delicately rendered than the PS Audio and there was an appealing tactile quality to the sound of the admittedly large solo instrument. Perhaps Kopatchinskaja is a fan of the late Jascha Heifetz—the orchestra peeks around her shoulders just as it did around Heifetz on his recordings! 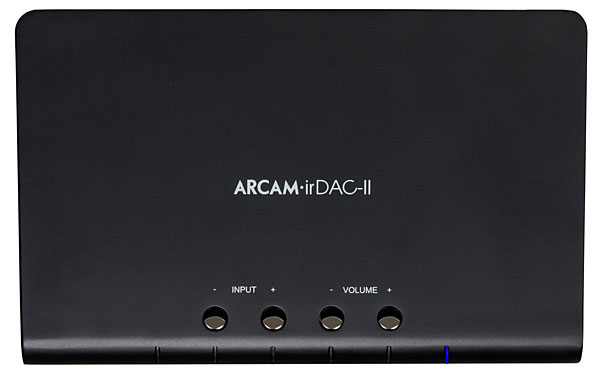 I had no problem playing single-rate DSD files with the irDAC-II, using either the Aurender N10 or Antipodes DX servers. I have a secret love of Karen Carpenter's singing—her breath control rivaled Sinatra's in his prime—and in "We've Only Just Begun," from the Carpenters' Singles 1969–1981 (DSD64 file, A&M/Analogue Productions), her husky tones sounded appropriately intimate via the Arcam. And the complicated kick-drum pattern in this track didn't interfere with the subtly balanced bass guitar.

However, when I tried to play double-speed DSD files with the Antipodes, such as my recent purchase of Christian Tetzlaff and Lars Vogt's superbly idiomatic recording of the complete Brahms Violin Sonatas (DSD128 file, Ondine/HDtracks ODE1284-2D), the irDAC-II's USB input light turned red and there was no output. Sourcing the same DSD128 files from the Aurender via the same long Belkin Gold USB link, they played fine with the Arcam DAC, as they did when I substituted a short AudioQuest Forest USB link for the Belkin with the Antipodes. (The engineer who recorded Kopatchinskaja's Tchaikovsky could learn from Ondine how a violin should be recorded.) So either the Arcam or the Antipodes is fussy when it comes to handling high data rates via USB.